Born in Guatemala, Henry Escobedo came to the United States when he was nine years old. When he was 19, he joined the military to give back to the country that provided so much to him.

He first deployed during Operation Iraqi Freedom in 2003 as an Infantryman with the 2nd Battalion, 37th Armor, 1st Armor Division. During that deployment, Sergeant First Class Escobedo sustained a concussion after falling off his vehicle in Baghdad/Al Kufa-Najaf, Iraq. He left the Army briefly after his first tour, but missed it, and came back in with the 75th Training Command (headquartered in Houston) as an Active Guard Reserve (AGR) Soldier. He deployed with the 75th to Taji, Iraq, for his second tour in 2010 with the mission of training the Iraqi Army.

When he returned home from his first deployment, he began to experience headaches and dry eyes. The condition worsened during his 2010 deployment. By the end of 2011, his vision deteriorated almost completely; he is now legally blind with minimal light perception. Doctors eventually diagnosed him with Leber’s Optic Neuropathy.

After his diagnosis, it was difficult for Henry to rely on others. He found strength through his wife Mayra’s unyielding support. The two met while serving together. “Mayra has stuck with me through thick and thin, she is my light,” he says.

Now medically retired, Henry’s main priority is Mayra and their son and daughter, Jairo and Jade. He says he is now able to easily navigate his single-level Homes For Our Troops home with automatic doors and wide hallways. Since he only has minimal light perception, ample lighting provides a comfortable environment, improving his daily living situation.

Now settled in his specially adapted custom home, Henry’s confidence and determination have increased and he is motivated to pursue his future goals. In 2020, he received his master’s degree in clinical mental health counseling. “The home brings an immense sense of happiness and joy not only to me but to my family as well,” he says.

A longtime resident of Texas, Henry chose to build his home there to be close to family.

Henry says his specially adapted home gives him a renewed energy in life. “I feel empowered knowing there is always hope and people that care. I am more enthusiastic and look forward to finishing goals I once started,” he says. 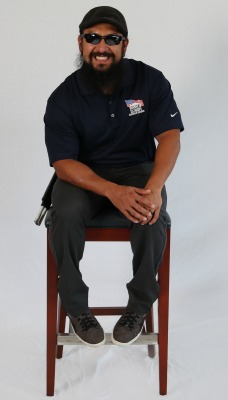