Michael “Adam” Emory enlisted in the Army at the age of 22 in 1998, wanting to give back to his country. He first deployed to Iraq as a mechanic with the 101st Airborne Division. He planned on making it a career, until he was severely injured during his second deployment to Iraq.

On April 28, 2007, SSG Emory, serving as a fire support specialist with 2/16 Infantry Regiment, 1st Infantry Division, was shot in the head by an enemy sniper during an operation on a rooftop in Baghdad, Iraq.

His comrades acted quickly to evacuate SSG Emory. Four Soldiers carried him down three flights of stairs, and one shielded SSG Emory with his own body from the enemy fire as they transported him to the vehicle.

SSG Emory’s gunshot wound resulted in a craniotomy (removal of a part of the skull to reduce swelling), and a traumatic brain injury (TBI) causing left side paralysis.

Adam was severely injured while serving on his second tour in Iraq on April 28, 2007. In the years since his injury, Adam made amazing progress and had returned to doing the activities he loved – sky diving, working on cars, going to the gym, taking jiu-jitsu, studying finance, visiting his adult sons Austin and Brandon in Georgia, and spending time with his daughter, Lea. He was also very close with his former wife Lucy.

Adam said it meant a lot to know the American people cared about his recovery, and he was grateful to those who supported the building of his Homes For Our Troops home. “Nothing will ever take away my injuries or experiences, but knowing people want to make my life better, makes it all worth it.”

Homes For Our Troops extends our deepest sympathies to the family and friends of Army Staff Sergeant Michael “Adam” Emory, who passed away in Schertz, Texas in November 2019. Adam was a valued member of the HFOT Family, and a strong supporter of our mission.  We will miss him greatly. 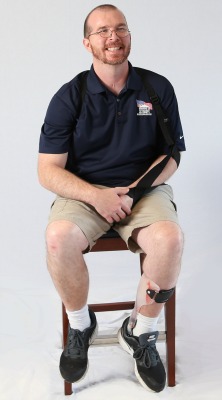