Liam Dwyer was in college when terrorists attacked the USS Cole in October 2000. As soon as he learned the horrific details, he immediately met with a recruiter and subsequently joined the Marines. He deployed twice during his military career – first to Iraq in 2006 and then to Afghanistan in 2010.

During his second deployment, he served as a civil affairs specialist with the 1st Battalion, 5th Marine Regiment. On May 21, 2011, Marine Staff Sergeant Dwyer was on patrol searching a compound when he stepped on a 30-pound improvised explosive device (IED). The blast traumatically amputated his left leg and severely damaged his remaining limbs.

He endured more than 50 surgeries in the following four years at Walter Reed Medical Center. During his recovery there, he met his wife Meghan.

Now medically retired, Liam has raced cars professionally for Mazda. He says racing and driving were his biggest motivators during recovery. When he retires from racing cars, Liam would like to finish a degree in mechanical engineering.

Even though Liam successfully drives around a speedway, navigating his previous home was an obstacle. There was not enough space for him to use his wheelchair, and it was a challenge for him to climb the stairs. The open floor plan and wide doorways in his single-level Homes For Our Troops home mitigate these issues for Liam.

Originally from Connecticut, Liam chose to live in Florida for the warm weather, healthcare, and support system of family and friends he has in the state.

Liam says his specially adapted custom HFOT home enables Meghan and him to pursue their dreams. “The possibilities are endless in this new home,” he says. 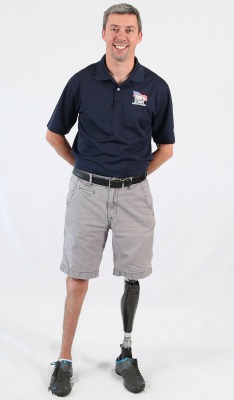