Joining the military for the challenge, Daniel Dudek enlisted in the Army as a parachute rigger in the Army Reserve while attending college.  Upon graduation, he was commissioned as a field artillery officer. He loved the discipline, the camaraderie, learning new skills, and traveling across the world.

In early 2007, then Major Dudek deployed to Iraq as the brigade fire support officer for the 4th Stryker Brigade Combat Team, 2nd Infantry Division.  While operating north of Hussainiyah, Iraq on July 19, 2007, his Stryker was struck by an explosively formed penetrator (EFP), wounding him and killing the Soldier next to him.  Several pieces of fragmentation from the blast hit Danny in his lower back and hips. A medevac flight got him to surgery within an hour, which Danny credits to regaining some of his mobility. As a result, Danny has an incomplete spinal cord injury known as cauda equine syndrome.

Once back in the United States, Danny initially recovered at Walter Reed Army Medical Center, followed by four months at the Puget Sound VA Health Care Center in Seattle on the spinal cord ward.  Danny says he was set up for success with a great VA Care Team, and a key part of recovery was being able to continue to serve in the Army for 14 years. This included the opportunity to command a Warrior Transition Battalion, and serve in the Warrior Transition Command working to publish what is now the Army regulation for wounded, ill and injured care.

Now medically retired after 30 years, Danny is focused on the next phase of life with his wife, Megan. He believes adapted sports are a crucial part of living a healthy lifestyle and plans on playing golf, pickleball, swimming and cycling in the future. Even though Danny can walk with ankle-foot orthotics or braces, he still struggles with challenges throughout his home, especially as he ages and undergoes additional surgeries. In his current home, there are two levels and sharp corners everywhere, making it difficult for him to maneuver his wheelchair without damaging all the walls and corners.

Danny has participated in Homes For Our Troops build events and has seen firsthand the special adaptations and the impact an HFOT home has on injured Veterans. Receiving a specially adapted custom home will enable Danny to begin a new chapter of his life. “A home built for me, without the daily limitations and challenges, will allow me to stay active and in my home longer as we age,” Danny says.

Originally, from North Carolina, Danny is choosing to build his home in Washington to enjoy the Pacific Northwest.  He cannot thank HFOT donors and supporters enough for recognizing the need of our nation’s Veterans. “Homes For Our Troops is a special opportunity. This gift gives our Veterans the chance to thrive.” 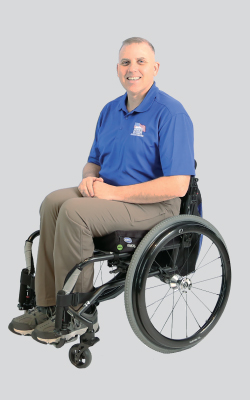