In May 2009, Marine Corporal Larry Draughn was on his second deployment with Golf Company, 2nd Battalion, 3rd Marines, when an improvised explosive device (IED) in Helmand Province, Afghanistan, caused the traumatic amputations of both of his legs, as well as the amputation of two fingers on his right hand.

Cpl Larry Draughn was on a routine foot patrol of the area around his company’s base camp when an IED exploded under his feet. While cautiously stepping into the footprints of the forward team to ensure there were no bombs in the area, his weight transferred from one footprint to the next, detonating an IED that was buried underneath the barren poppy field he was patrolling. Thrown through the air by the force of the blast, life-saving measures were administered as tourniquets were applied to both of his legs.

Hand-carried by stretcher for more than half an hour to be evacuated, Cpl Draughn was transferred to a waiting Blackhawk helicopter that flew him to Bagram. It was there, over the next few days, that he learned of his amputations and his journey home began. Airlifted to Landstuhl, Germany, Cpl Draughn was next sent to Bethesda Naval Hospital before arriving at Walter Reed Army Medical Center where he received daily therapy sessions.

A native of Dayton, Ohio, Larry is an avid fisherman and enjoys deep sea and bass fishing, as well as hunting. Larry and his wife Kaytlin have two children, Garon and Addison. As a family, they enjoy camping and going to sporting events. He coaches baseball and football for his son’s teams, and his daughter is a competitive cheerleader.

Homes For Our Troops presented Larry with his specially adapted custom home in Fairborn, Ohio, on Oct. 8, 2011. “This specially adapted home greatly puts my mind and heart at ease by giving my family a place to always call home as I try to find my place outside the military, learning to live with my prosthetics. Thank you for all of your continued support and thank you to all of the men and women proudly serving our great country,” he says. 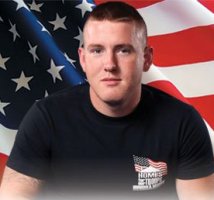