On July 24, 2010, while on his second deployment, Marine Sniper Corporal Daniel Peterson lost both legs after an explosion in the Southern Helmand Province of Afghanistan.

Returning from a classified mission, the Sniper Team was making their way along a tree line while returning to base when a bomb exploded, hurling Cpl Peterson more than ten feet into the air. Landing in the crater created by the explosion, Daniel immediately knew he was seriously injured.

Sustaining traumatic amputations to both of his legs, Cpl Peterson also had a fractured pelvis; the broken bones and shrapnel from the blast causing further internal injuries as he awaited aid. Placing tourniquets on his own legs, Cpl Peterson was then treated by the Corpsman as his team carried him away from the tree line and prepared to be evacuated.

Cpl Peterson enjoys swimming, video games, and going to the range. In 2018, Daniel started a seven-month welding specialist program at the Houston campus of the Tulsa Welding School. The program included hands-on training for structural welding, fluxcore welding, pipe welding, along with instruction focused on career and welding certification preparation. He is passionate about off-roading/rock crawling and does a lot of work on his own jeep for this purpose. He excited to have started his own business working on jeeps and trucks.

When asked what he would like to say to the volunteers who helped make his home possible he shared the following: “You never know what freedom is until it is taken from you…that’s why patriots like us stay in the fight. Thank you for helping to give me back some of the everyday freedoms we have fought to preserve…regaining my independence helps me continue to stay in the fight.” 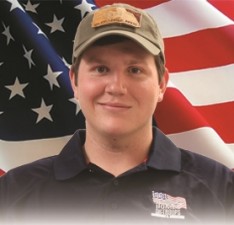