Joining the military was something Zachary “Zac” Dinsmore always wanted to do. After graduating from high school, he enlisted in the Marines as an Infantryman.

In 2011, Corporal Dinsmore deployed on his second combat tour with the 3rd Battalion, 7th Marines.  While serving as a team leader on this deployment, he was instrumental in saving HFOT home recipient Sgt Milan Franklin’s life.

Two weeks later, on Oct. 31, 2011, Zac stepped on an improvised explosive device (IED) in Sangin, Afghanistan. The IED partially exploded since it was wet from the rain, but it was enough to shatter Cpl Dinsmore’s leg from the knee down. In 2014, after years of enduring numerous surgeries and rigorous therapies to salvage his leg, Zac made the decision to have doctors amputate the limb. Today, Zachary still copes with skin issues from wearing prosthetics, but his overall pain level has decreased and he has more mobility.

Now medically retired, Zac is a proud parent to his active young son, Barrett. He loves spending time with Barrett, but often becomes discouraged when his current home limits the activities they can do together. Zac frequently gets infections from his prosthetics, so he prefers to use his wheelchair at home. “Barrett is fast now and wants to do different things in different rooms, but on days I can’t wear my prosthetic, the stairs make it difficult to keep up with him,” he says.

Receiving a single-level specially adapted custom HFOT home will enable Zac to raise his son without barriers. Zac loves welding, blacksmithing, and building things in his garage. The financial freedom of the home will empower Zac to finish his associate’s degree in welding and pursue a career in the field.

He is choosing to build his home in Colorado, where he grew up, to be close to family.

Zac wants HFOT’s donors to know they are changing lives. He says it felt almost impossible to find a wheelchair accessible home on his own. “Thank you for giving me the opportunity to receive this gift, it will make it easier for me to care for my son.” 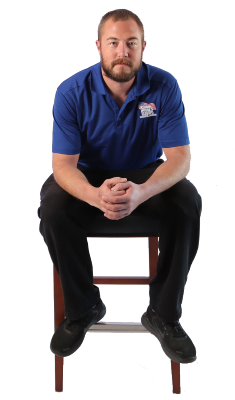