Sept. 11, 2001, was a defining moment in Noe “Lito” Santos Dilone’s life. When terrorists flew planes into the Twin Towers, Lito was a high school senior living only a few miles away in Queens, N.Y. Witnessing the horrific events unfold so close to home motivated Lito to protect and serve his country. It was at that moment he felt a calling to join the Army. He enlisted as a mechanic with the 3rd Infantry Division and went on his first combat deployment to Iraq in January 2005.

On Sept. 6, 2005, Lito was serving as the lead gunner of a convoy with the Division’s Personal Security Team in Baghdad when his vehicle drove over multiple improvised explosive devices (IEDs). Two teammates were killed instantly, and Lito lost his left leg at the hip and sustained hearing loss.

Lito spent two and a half years recovering at Walter Reed Medical Center undergoing countless surgeries due to infection after his initial amputation. Now 14 years later, Lito mainly uses his crutches but sometimes prefers using his wheelchair to give his shoulders a rest.

In the years since his injury, Lito has found a passion for golf, and empowers other Veterans through the sport by working with nonprofits. Music is another important outlet for Lito. He enjoys expanding his home recording studio and plans to further his musical knowledge by pursuing a degree in performing arts. Receiving a donated, specially adapted custom Homes For Our Troops home will give Lito the energy to achieve these goals. His current home is two stories, requiring him to use the stairs on his crutches to access his bathroom and bedroom. He finds this environment discouraging and tiresome, and often worries about his safety.

Originally from Brooklyn, N.Y., Lito is choosing to build his HFOT home in the Orange County area of Florida to be close to family and friends.

Lito sincerely thanks HFOT donors and supporters for their generosity. “It takes genuine, good-hearted people to donate time and resources toward such a great cause. It doesn’t go unnoticed. I am friends with several Veterans whose lives have taken a different, much better path since being part of the HFOT family.” 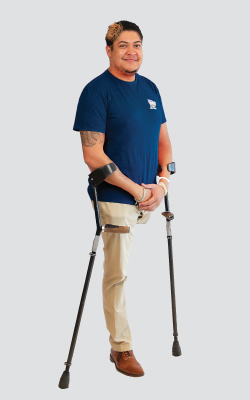