Dominic Davila joined the military after high school with the hopes of becoming a police officer after serving. He enlisted in the Marines as a machine gunner, deploying to Iraq in 2007 and then to Afghanistan in 2009.

On July 23, 2009, Corporal Davila was serving with the 2nd Battalion, 8th Marines, when his vehicle drove over an improvised explosive device (IED) in Helmand Province, Afghanistan. Cpl Davila lost his right leg below the knee and sustained a fractured left ankle in the blast.

Once transferred back to the United States, Dominic began the lengthy recovery process at Walter Reed Medical Center. He spent three years there doing physical therapy and rebuilding his muscle and strength. Now, ten plus years after being injured, Dominic considers himself to be more active than he’s ever been, and credits his progress to the support of his doctors and therapists at Walter Reed.

Medically retired, Dominic and his wife Krista enjoy outdoor activities like camping, hiking, fishing, kayaking, and snowboarding. Though Dominic keeps active, he cannot fully rest and recover in his current home because it is not adapted. He and Krista currently share a three-story townhome that cannot accommodate Dominic’s wheelchair. This living environment takes a toll on Dominic’s body daily. Krista often worries that Dominic will injure himself further when she is not home. In a specially adapted custom Homes For Our Troops home, Dominic will be able to use his wheelchair, enabling him to recuperate from being on his prosthetic. Regaining his independence within the home will empower Dominic to pursue his future goals. He and Krista would like to start a family, and he would like to expand the volunteer work he does with the nonprofit Wishes for Warriors, an organization that provides experiences and resources to help improve the lives of Veterans. Additionally, Dominic is working toward his MBA at Salt Lake Community College.

Originally from Chicago, Dominic is choosing to build his home in North Carolina because of the state’s ample outdoor activities.

Dominic appreciates HFOT’s donors and supporters taking the time to care for injured Veterans and their families. “This opportunity means so much to us, and words cannot begin to express how life-changing it truly is for our family. Because of your support, we can start growing our family.” 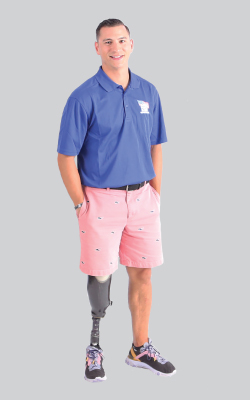