Peter Damon was 28-years-old and working as an electrician when he decided to join the military. He had a three-year-old daughter at the time, and wanted to set a good example for her. He chose to enlist in the Massachusetts National Guard so he could remain close to his family.

Army Sergeant Damon volunteered to go on his first combat deployment to Iraq in September 2003 as a helicopter mechanic with the 126th Aviation Regiment. A couple months later, on Oct. 21, 2003, SGT Damon was inflating a tire on a UH-60 Black Hawk helicopter at Camp Anaconda in Balad when the rim of the wheel blew apart. The force of the explosion traumatically amputated SGT Damon’s left wrist, his right arm above the elbow, and knocked him unconscious. The tire’s rim hit and killed the Soldier working beside SGT Damon. The next memory he had was realizing, upon waking from his coma, that he had no arms. His first thoughts were worries about how he was going to be able to work and provide for his family…would they end up being homeless?

After spending more than a year recovering at Walter Reed Army Medical Center he received a set of prosthetic arms and a set of hooks. SGT Damon chose to wear only one hook, attached to his left elbow. Born right-handed, he taught himself to use his left as he no longer had an elbow to attach the hook to on the right arm.

While a patient at Walter Reed, Peter was approached by John Gonsalves, a Massachusetts construction worker who was in the early stages of starting up a non-profit organization that built specially adapted custom homes for severely injured Veterans. Peter would later become the organization’s first home recipient in 2005. The father of two children, Pete has found the ability to move about freely in his own home, not relying on his wife, Jenn, and his children for tasks he can now do for himself in his Homes For Our Troops home.

Peter always enjoyed painting and drawing, and would often sketch to pass the time during his deployment. While at the hospital, he taught himself to use his hook prosthetic to pick up and use a pencil, practicing every night in his room. When he returned home, he started working in pastels. He and his wife opened True Grit Art Gallery in 2015, where he displays his own artwork as well as other local artists. Peter says the freedom and independence he regained from his HFOT home gave him the ability to start up the gallery.

Often times donating original artwork to events and organizations that support Veterans’ causes, Peter has had his artwork displayed at the US Capitol, the White House, and other prestigious locations across the country. Pete would like to thank everyone for their support. The assistance from Homes For Our Troops has helped give him back his independence. He enjoys being able to be an active member of his family and of society. 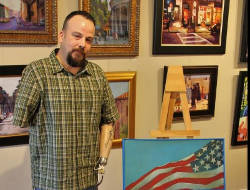