Coming from a long legacy of family who served, Joshua Craven always knew he wanted to join the military. He enlisted in the Army as a military police officer shortly after graduating from high school in 2006. He instantly fell in love with the camaraderie of serving alongside his brothers in arms and the opportunity to see the world.

Specialist Craven was 22 when he went on his first deployment to Iraq as a military police officer with the 3rd Brigade, 3rd Infantry Division, in 2009. Toward the end of the tour, on Aug. 4, 2010, Specialist Craven was driving the lead vehicle in a convoy when an explosively formed penetrator (EFP) detonated on the driver’s side door of the vehicle. SPC Craven lost his left leg and sustained severe damage to his right leg with paralysis below the knee.

When Joshua’s wife Holly received the devastating news about her husband, she immediately feared what their future would hold. “I just kept thinking about how life was going to be. We were so young,” she says.

Joshua returned to the United States days after his injury, and spent two months at Walter Reed undergoing surgeries, skin grafts, and wound cleanings. Holly remained at her husband’s side the entire time, giving him shots and helping administer antibiotics.

A few years after his injury, Joshua and Holly became proud parents to their daughter Aubrey. Joshua loves spending time with his family, but often gets frustrated when limitations within his home prevent him from being fully present. Joshua prefers to use his wheelchair at home to rest his legs, but cannot do so in his current living environment because it is not accessible. Receiving a specially adapted custom Homes For Our Troops home will enable Joshua to rest in his wheelchair and participate more in his role as a husband and father. “I will be able to just relax and be a part of the family,” Joshua says.

Regaining his freedom and independence in a specially adapted home, Joshua says, will empower him to be more active in his community. He aspires to open his own gunsmithing business, and knows the home will give him the motivation to make this dream a reality. Holly cannot wait to see her husband thrive in a barrier-free environment.

Joshua and Holly are choosing to build in North Carolina, where they both grew up and are currently raising their daughter.

Joshua is incredibly grateful to HFOT’s donors and supporters for their kindness and generosity. “Your support helps create environments for families that are built around love, care, and compassion. Being able to be a part of everything my family does will be the best gift I could possibly receive.” 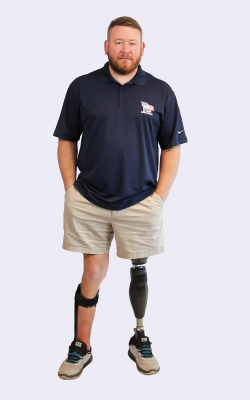