On the morning of Aug. 26, 2011, Marine Cpl Justin Crabbe was on his second deployment patrolling along a dam happily thinking that he would be returning to his base by breakfast time when he stepped on an improvised explosive device (IED). The explosion resulted in the loss of both legs above the knee and damage to his left hand.

Marine Cpl Crabbe says the moment he triggered the IED was right out of a slow-motion movie scene, only he was not able to hear sound: others senses kicked in immediately, however, and he could feel and smell the flesh of his legs burning. When his fellow Marines found him face down in a murky puddle, they presumed him to be dead.

While members of his squad applied tourniquets and administered aid, Cpl Crabbe’s thoughts turned to the condition of the other men on patrol with him. Assured that everyone else was fine, but unsure of his own fate, Cpl Crabbe then made a friend promise to call his mom and deliver a message to the family, that he was sorry and that he loved her and the whole family. Medics then administered two shots of morphine to ease his pain before transporting him to Camp Bastion, and later to Braghan. Cpl Crabbe was eventually airlifted to Landstuhl; his next memory after making his buddy swear to call his mom is of waking up in Bethesda Naval Medical Center almost three weeks after the blast. Complications due to lung infections and pneumonia caused by nearly drowning face down in the water at the injury site would necessitate he be placed on a ventilator during that time.

Since moving into his home, Justin has gotten married to his wife, Casey. They became parents to a baby girl in January 2016. He says the home gives him independence and “the ability to live a normal productive life without feeling like I am handicapped or disabled.” 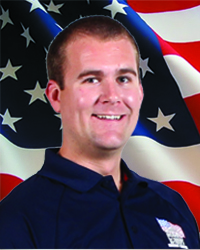