The sadness and anger Joshua Cope felt from the 9/11 attacks fueled his motivation to join the Army. The military gave him a sense of purpose and he enjoyed the unity he felt with his brothers in arms. After enlisting as an Infantry mortarman, Josh was assigned to 1-26 Infantry, 1st Infantry Division, in Schweinfurt, Germany. He deployed from there in 2004 to Iraq, operating in the Samarra area. In 2006, he deployed again to Iraq to Baghdad.

He intended to make a career out of the military, but those plans ended on Nov. 13, 2006, during his second deployment. While serving as a mortarman with the 1st Battalion, 26th Infantry Regiment, in Baghdad, Iraq, Sergeant Cope’s vehicle was struck by an improvised explosive device (IED). SGT Cope recalls looking up at the sky during the explosion, thinking he was dying. But the comrades who came to his side assured him he would see his daughter, Laney, again.

SGT Cope lost both of his legs and the use of his right hand as a result of the blast. After being transferred back to the United States, he endured surgeries every other day for two months at Walter Reed. He was also treated at the San Diego Naval Hospital for two years.

Joshua admits his recovery has been emotionally and physically difficult. Frequent nightmares and nerve pain caused him to self-medicate, leading him to seek help from an inpatient rehab at the Lake Nona VA. His outlook began to turnaround when he met an injured Vietnam Veteran who told him “Anytime you feel it’s not worth it, just look into a child’s eyes and you’ll make it through.”

Joshua has also found jiu-jitsu to be therapeutic for his recovery. He has been participating in the sport for more than a year now and would like to coach. “It truly gives me peace of mind and a sense of purpose,” he says.

Since being injured, Joshua has welcomed three more children into this life, sons Brydon and Darren, and daughter Cadence, and married his wife Claudia de Carvalho Pinto. Though Joshua’s mental and physical recovery has improved, the obstacles he faced in traditional housing remained. In his previous home, he could not access many rooms or the bathroom while in his wheelchair, and performing household tasks were a challenge. Joshua says his mortgage-free, specially adapted custom home with an open floor plan, wide doorways, and an accessible shower gives him a sense of security for his future. Without the stress of living in an inaccessible home, he has more time to pursue a career as a counselor or start a nonprofit to support other Veterans. Now that Joshua has more independence within the home, Claudia will have more time to pursue a college degree.

Originally from Florida, Joshua chose to build his home there to be close to family. He is incredibly grateful for HFOT and its donors and supporters, noting that the organization feels like family to him. “Thank you for making a difference in the lives of Veterans and giving them hope in their new normal,” he says. 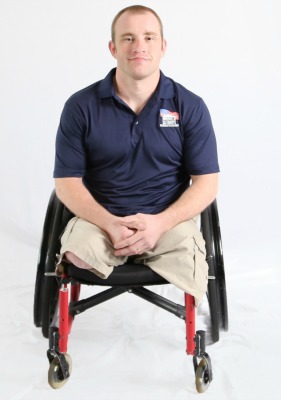