Cody Rice was working a factory job when he decided to join the Army as an Infantryman, needing a change and wanting to better himself.

He first deployed to Afghanistan in 2009 and then again in 2012. During his second tour he served with B “Legion” Company, 1st Battalion, 503rd Infantry, 173rd Airborne Brigade.

On Aug. 11, 2012, Staff Sergeant Rice was manning an observation post with his squad in Logar Province, Afghanistan, when he stepped on an improvised explosive device (IED). He lost his right foot and sustained a traumatic brain injury (TBI) as a result of the blast.

SSG Rice underwent two years of rehabilitation at Walter Reed Medical Center and endured several surgeries. Building enough strength in his right leg was challenging, he says, but he is now more physically active on his prosthetic.

Medically retired, Cody plays for the USA Patriots, America’s amputee softball team. This activity gives him the opportunity to play the sport with other injured Veterans while also inspiring children with injuries and physical restrictions. He is also working on his bachelor’s degree.

After a long day at school or on the field, Cody had difficulty relaxing in his previous home. His former living situation was not wheelchair accessible, forcing him to often balance on one leg, leaving him unsteady. In his specially adapted custom Homes For Our Troops home, Cody is able to maneuver around every room with ease. Additionally, Cody’s wife Shanna does not have to worry about Cody’s safety while he is home alone. “I will be in my wheelchair more often as I get older. The free space in this home helps me raise a family,” he says.

Originally from Ohio, Cody choose to build his home in Northern California to be close to family.

Cody appreciates the support from organizations like Homes For Our Troops. “There are select men and women willing to give everything for others to be free,” he says. “I cherish the fact that HFOT’s donors and supporters understand this and know it is not easy for Veterans whose lives have been changed forever due to a missing limb or injury.” 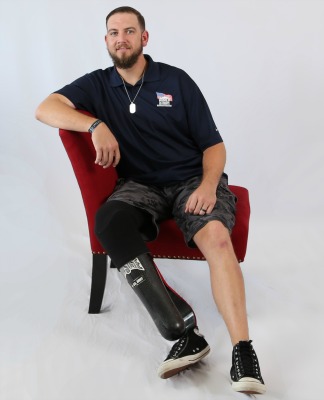