Bryan Chambers watched the September 11 terrorist attacks live on television when he was a teenager. Watching the terror unfold made Bryan want to do something to protect his country and loved ones. He felt the best way to do this was by joining the Marines. He enlisted as a light armored vehicle crewman with the 2nd Light Armored Reconnaissance Battalion, going on his first tour to Iraq in 2006.

On Feb. 28, 2007, during this first deployment, Lance Corporal Chambers was driving the lead vehicle in his platoon when he rolled over an improvised explosive device (IED), flipping the vehicle. LCpl Chambers lost his right leg, sustained shrapnel injuries throughout his body, and a traumatic brain injury (TBI).

In the year following his injury, Bryan underwent over 70 surgeries. Early on in his recovery, Bryan says he coped with much pain and anger, but his outlook improved as he learned to adapt to his new lifestyle.

Now medically retired, Bryan and his wife Rhyann are proud parents to their twins, Gavin and Riley. They envision growing their own food and raising animals on their land to teach their children about sustainable living. The challenges Bryan faced in their previous home prevented Bryan and Rhyann from pursuing this dream. Bryan often became frustrated because his wheelchair could not fit in his previous home, making it challenging for him to do daily tasks and care for his children. Rhyann constantly feared Bryan would injure himself slipping on the stairs outside their home, especially during harsh Midwestern winters. Bryan and Rhyann are relieved to have received a specially adapted home that will enable them to achieve the future they desire. Bryan wants his home to be a place where fellow injured Veterans can stay when they are in town.

Though Bryan and Rhyann met while they were living in Colorado, they chose to build their home in rural Indiana, where Bryan is originally from, for the lower cost of living and to be near family.

Bryan is grateful to HFOT’s donors and sponsors who made his dream of living in a barrier-free home a reality. “I’m thankful there are people like you,” he says. “You are truly making a difference in Veterans’ lives. 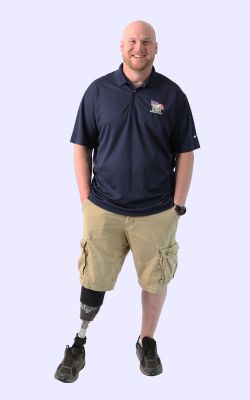