When it came time to decide between going to college or joining the military, the choice was clear for Craig Brady. He joined the Marines as a combat engineer and quickly fell in love with the lifestyle, including traveling the world, and the camaraderie.

On January 7, 2010, during his third combat deployment, Sgt Brady was conducting a battle damage assessment with the 2nd Combat Engineer Battalion, 2nd Marine Division, when he was injured during an improvised explosive device (IED) blast in Nowzad, Afghanistan.  He lost his right leg below the knee, back injuries, and left forearm damage in the blast. Once back in the United States, Craig underwent surgeries at Bethesda Naval Hospital. He credits his progress in recovery to his wife, Catie.

Now medically retired, Craig enjoys spending time with Catie and their two sons, Bruce and Luke. Although Craig is involved in many activities, including playing and coaching sled hockey, he still faces challenges with daily tasks within his current living environment.  The stairs throughout the home make it difficult to access his sons’ rooms while he is using a wheelchair.

Receiving a specially adapted custom home, Craig will gain a new lease on life having a safe place to rest and recover. Catherine will no longer have to worry about her husband slipping in the shower. Craig looks forward to an overall happy quality of life and the financial freedom the home will bring his family.

Originally from Massachusetts, Craig is choosing to build in New Hampshire where they currently live.

Craig says there are no words to thank HFOT donors and supporters. “Thank you so much for this incredible opportunity. HFOT will set my family up for success for the future, and provide me the opportunity to live comfortably in my home.” 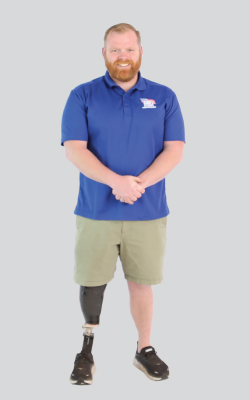