Russell Carter was in middle school during the 9/11 terrorist attacks. This attack ignited a desire within him to protect his country and be a part of something bigger than himself. As soon as he was old enough, he joined the Army. He enlisted as an Infantryman with the 101st Airborne Division, deploying to Afghanistan in 2010.

On Jan. 2, 2011, the vehicle carrying Sergeant Carter and four others malfunctioned, causing it to lose steering control, and go off the side of a bridge, falling about 50 feet. SGT Carter sustained a spinal cord injury paralyzing him from the neck down and a traumatic brain injury (TBI).

Russell spent the following year undergoing therapies at rehab centers while he waited for his mother’s home to be ready for him. Now medically retired, Russell still lives there, but the home presents many challenges because it is not adapted and he can only access one room. He often becomes frustrated that he has to rely on his mom for daily tasks like preparing meals. He says receiving a specially adapted custom Homes For Our Troops home will be a huge step toward restarting his life independently. The home’s open floorplan and wide, automatic doorways will enable Russell to access every room easily. Regaining this independence will give him back a sense of belonging and motivate him to contribute to his community and pursue future goals. He would like to be an advocate for the disability community and volunteer with Veteran organizations that go on fishing and hunting trips. He shoots pool professionally, competes in an American Poolplayers Association (APA) league, and is interested in training for other events with Paralyzed Veterans of America (PVA).

Originally from Pennsylvania, Russell is choosing to build his home in Florida for the warm climate and to be close to healthcare.

Russell wants HFOT donors and supporters to know they are making an impact. “Being a productive member of society while having some independence is important to me and this would be a huge step toward getting those things back. Thank you so much for your time and dedication to myself and fellow severely injured Veterans.” 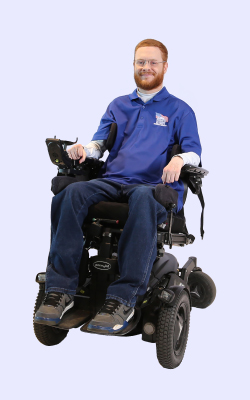