In May 2009, during his second deployment, Army Staff Sergeant Robert Canine was a truck commander returning from a patrol with the 1st Infantry Division in northwest Baghdad when an explosively formed penetrator (EFP) struck his vehicle. SSG Canine sustained injuries so severe, both of his legs required amputation.

First transported to a field hospital, SSG Canine was then taken by Blackhawk helicopter to Balad before arriving in Landstuhl, Germany. Five days after the blast, Robert was at Walter Reed Army Medical Center where he began his road to recovery.

Robert enjoys spending time with his family, the outdoors, and anything to do with military history. Robert is currently working at Veterans United Home Loans where he is honored to assist fellow Veterans and service members in utilizing their VA home loan benefit. Robert also volunteers as a Veteran Service Officer for the Disabled American Veterans (DAV) organization, and serves on the Board for his local homeless Veterans shelter, Welcome Home Inc. Since receiving his HFOT home in June 2010, Robert has grown his family with a son born in 2018, and he is expecting a daughter in 2021.

Robert attributes a great deal of his success and rehabilitation to his HFOT home. Even after losing his legs, and learning to walk with prosthetics, his biggest challenges came later during his recovery. Robert is grateful for all the support he received from everyone who made his home a reality. “The home has served as a safe haven during my most difficult times during the recovery process. It is truly humbling, and I appreciated it so much. The home mitigated the daily challenges I faced just getting around…this home has improved my daily quality of living.” 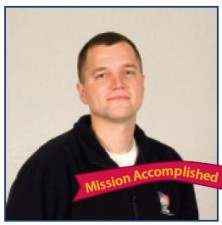