Kevin M. Campbell decided it was his time to do his share and follow in the footsteps of his military family when he joined the New Hampshire Air National Guard in 1997. He viewed serving as an accomplishment and an opportunity to travel the world, and got an opportunity to do so when he went on his first deployment to Kuwait in 2005.

In February 2010, Staff Sergeant Campbell volunteered for a second tour of duty to Southwest Asia as a supply management specialist with the 157th Air Refueling Wing of the 379th Air Expeditionary Wing. Stationed at Al Udeid Air Base in Qatar, he was tasked to tear down and rebuild body armor. Kevin’s responsibilities included lifting 40 pounds of body armor for 13 hours a day. On March 2, 2010, three weeks into his deployment, he ruptured two vertebrae while performing his duties. Additionally, the relentless desert sun caused large painful red sores to spread over Kevin’s skin. After seeking medical attention, he returned to duty and worked through his back pain and discomfort of his sores for the remainder of his deployment.

It was not until he returned to the United States in April 2010 that a dermatologist diagnosed Kevin with Systemic Discoid Lupus, and informed him that he must avoid all sun exposure. His spinal cord injury has progressed over the past eight years to paralysis in his lower back and left leg, and he now uses a wheelchair most of the time. Despite his injuries, Kevin is proud of his 16 years of service. “That deployment may have cost me my health and career, but if the body armor I constructed saved one life, the pain and struggles were worth it,” he says.

Now medically retired, Kevin was previously living in cramped quarters that were not wheelchair accessible. It was frustrating for him to rely on others. A specially adapted custom Homes For Our Troops home enables Kevin to maneuver around the home freely. He can cook on his own in the home’s adapted kitchen with roll under sinks and pull down shelves. The safe and stable environment of an HFOT home gives Kevin time to go back to school and continue his studies. Kevin enjoys studying history, particularly World War I, the Roman Empire, and the British Empire. Having an HFOT home also gives him independence, financial stability, and a better quality of life to be able to one day start a family.

Kevin would like to say thank you to not only HFOT’s donors and supporters, but the employees and their families who sacrifice so much of their lives and family time on a daily basis to help out complete strangers from all over our great country. “There is a reason the U.S. is the world’s largest donor to charities and causes, and that reason is love.” 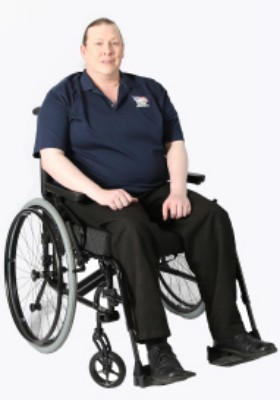