Justin Callahan joined the Army as a combat engineer at the age of 18 in 2000, with the desire to do something meaningful for his country. He served in Korea before deploying to Afghanistan in 2003 with B Company, 41st Engineer Battalion, 10th Mountain Division.

On Jan. 15, 2004, SGT Callahan was conducting route clearance operations outside of Bagram Airfield when an improvised explosive device (IED) went off. SGT Callahan lost his left leg as a result of the blast.

Following his injury, Justin endured several surgeries and months of physical therapy at Walter Reed Medical Center before medically retiring in May 2004. In the years since his injury, Justin has gotten married and started a family with his wife Katie. They have two sons, Callum and Connor, and a daughter, Cadence. Justin completed a master’s degree in Social Work (MSW) from Florida Atlantic University, and continues to serve Veterans as Social Worker at the West Palm Beach VA Medical Center. Justin enjoys attending church with his family, fishing, exercising, weight lifting, and swimming.

Though Justin is reaching milestones in his personal and academic life, coping with his injury for almost 15 years has taken a toll on his body. When he was in his early 20s, it was easier for him to hop on one leg while in the shower and navigate on crutches in a non-accessible home. Now that he is older and has his young children to care for, maneuvering around had become more challenging. A single-level specially adapted Homes For Our Troops home with a roll-in shower and open floorplan mitigates many of these issues for Justin. “The home enables me to move easily in my wheelchair. I am more productive at home with my family because I am not limited to one room,” he says.

The gift of a new home enables Justin to maintain his health and be a productive member of society. He plans to use his degree to work with other Veterans transitioning into civilian life. Additionally, the financial freedom of the home gives them the opportunity to save for their children’s futures.

Originally from upstate New York, Justin and Katie chose to build their home in Florida for the warm weather and medical care in the area.

Since he was injured early on in the war in Afghanistan, Justin says he has often felt forgotten, but HFOT’s donors and supporters changed this feeling. “HFOT truly leaves no man behind. This home takes a huge burden off my back and allows me to focus on my future goals, raise my family, and give back to others,” he says. 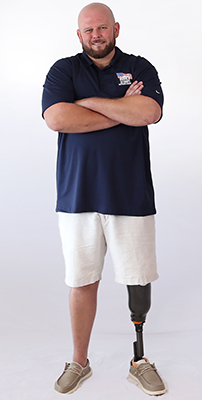