Army Staff Sergeant Heath Calhoun served in Iraq as an Infantryman with the 3rd Battalion, 327th Infantry, 1st Brigade, 101st Airborne Division. On Nov. 7, 2003, he was severely injured when a rocket-propelled grenade hit his vehicle, resulting in the amputation of both his legs above the knee.

Heath was at the rear corner of the vehicle when the grenade hit the tail light right beside his right leg and exploded. Lying on his side, he says he could see his legs were in bad shape. All Heath remembers is yelling to the driver of the vehicle to call the incident into the headquarters and laying his head back down.

While recovering from his injuries and learning to walk on prosthetics, Heath was introduced to adaptive skiing. Since 2008 his talents have taken him to several national and world championships. Homes For Our Troops presented Heath and his family with a specially adapted custom home in Clarksville, Tenn., in 2010. The home enables him to focus more on his goals. Heath competed in the 2010 Paralympics in Vancouver and the 2014 Paralympics in Sochi where he earned a silver medal in Alpine Skiing. He was the subject of the 2010 documentary The Fall Line and was featured in commercials for AT&T and BP during the 2014 Olympics.

Heath plays sled hockey now but is not competing in the Paralympics to spend more time with his son and two daughters. He is currently going to school for welding and teaching machining at night to transitioning service members. He plans to pursue a career in welding once he gets his certification. 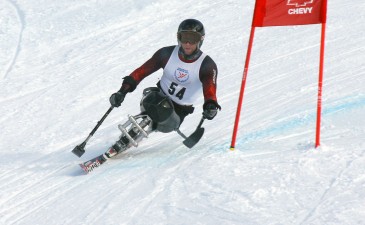