On Sept. 18, 2009, during his first combat deployment, Army Captain Joseph Caley, an Infantry platoon leader, was on patrol with the 1-155th Combat Aviation Brigade (CAB) when an improvised explosive device (IED) exploded in Kalsu, Iraq. CPT Caley was attempting to move an injured civilian to safety when a second IED explosion occurred. He sustained severe damage to his left leg and a traumatic brain injury (TBI) in the blast.

After 11 years of attempting to save his leg, Joseph made the decision to have doctors amputate it below the knee in January 2021. He is very involved with golfing and his family. 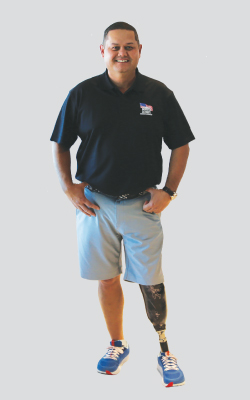