Following his family’s footsteps, Chris Byers enlisted in the Army as an Infantryman, wanting to serve his country with pride.

On July 7, 2012, Army SSG Chris Byers was on his third deployment in Mushan, Afghanistan with B Co, 1-17 Infantry, 2-2 Stryker Brigade Combat Team when he stepped on an improvised explosive device (IED).  The blast resulted in the loss of both of his legs below the knees, a traumatic brain injury (TBI), and tinnitus. Chris was evacuated by helicopter and was eventually brought to Texas where he was quarantined due to the bacteria he acquired when injured in Afghanistan. After a week’s stay in isolation, and several surgeries, Chris spent the next year learning to walk again and rebuilding his muscle mass.

Now medically retired, Chris enjoys spending time with his five children, woodworking, camping and exercising. While Chris lives an active lifestyle, his current home is not accessible. He wears his prosthetics throughout the day to be able to accomplish daily tasks, but it causes discomfort, including scars and blisters on his limbs.

A specially adapted custom home from Homes For Our Troops will be a new chapter for Chris. The freedom and independence he will regain in a single level home with an open floor plan will give him the peace of mind to safely take care of his children. Chris looks forward to the adapted bathroom, especially the therapy tub where he can rest and recover after a long day’s work.

Originally from Montana, Chris is choosing to build his home in Idaho where he currently lives.

Chris thanks HFOT’s donors and supporters for a second chance at life. “HFOT is a miracle made from the hearts of good people.” 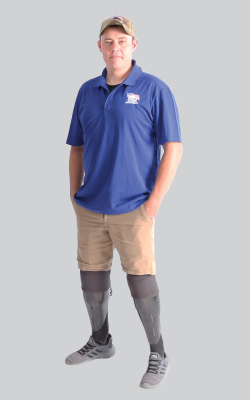