Andrew Butterworth grew up hearing stories from three of his grandparents who served during World War II. After high school, he wanted to make a difference and continue their legacy of military service. He first enlisted with the 82nd Airborne Division, serving on active duty for four years before joining the North Carolina Army National Guard as an Infantryman.

Shortly after he was injured, Andrew told his father he wasn’t going to let the injury stop him and  was determined to keep going. Nearly 18 years later, he has kept true to his word and has become a certified sky-diver and plays wheelchair softball. He also enjoys riding motorcycles and this interest is what led him to his wife, Julia, who was born missing a leg. The two met through mutual friends when Julia wanted help researching adapted motorcycles. They now have three children, Jana, William, and Henry.

Andrew and Julia say that both of them having physical disabilities presents many challenges, especially in caring for their children. There are days when they are sore from their prosthetics and have a hard time getting outside with their children in their current home. They currently live in an RV, where they travel to different locations in the country. Receiving a specially adapted custom Homes For Our Troops home with automatic doors and paved walkways surrounding the home will enable Andrew and Julia to take their children outside from the comfort of their wheelchairs. The home will also give Andrew the space and energy to create a workshop and start up a metal working business.

Originally from Missouri, Andrew is choosing to build his home in Northwest Arkansas to be close to family.

Andrew is grateful to HFOT’s donors and supporters for providing him and his family with the gift of an HFOT home. “Thank you for this amazing opportunity which will fill the daily needs of our family and give my wife and I the ability to have a home that will enable us to focus on our family and health.” 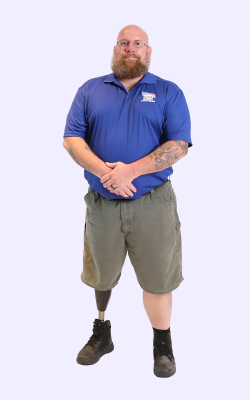