Michael Burns joined the Army six months after high school when he turned 18. His first assignment was supporting an Infantry unit with the 10th Mountain Division. His first deployment was Desert Shield/Desert Storm, and he had a subsequent tour in Korea. He then went to Fort Hood, and he deployed from there to Iraq in 2004.

While operating in Kuwait on Dec. 19, 2004, Army Sergeant Michael Burns, a transportation specialist with the 96th Transportation Company, pulled his convoy to the side of the road to fix a flat tire, when another truck hit him. SGT Burns was dragged under the vehicle for a quarter of a mile. As a result, SGT Burns lost his left leg, sustained burns on 30 percent of his body, and sustained severe internal injuries to his bladder and pelvis.

SGT Burns awoke from a coma a month later at Brooke Army Medical Center, where he remained for four months and endured almost 50 surgeries. He now has rods from his hip to his knees in both legs and a plate in his lower right leg.

Even a decade after his injuries, Michael still faced challenges with daily routine tasks in his previous home. His specially adapted HFOT home with widened doorways and hallways allows him to use his wheelchair at home with ease. With the lower countertops and roll under sinks, he is able to help his wife Sonia more in the kitchen.

Having a comfortable life at home enables Michael to focus on other activities. He currently enjoys spending time with his children and grandchildren, fishing and watching sports. He would like to start mentoring young children and coach a sports team.

Michael and Sonia choose to build their home in Madison, Miss., to be close to family.

Michael says having a specially adapted home brings him peace of mind, knowing that it belongs to him and his family. “It warms my heart to know that there are people who care and appreciate that we risked our lives and who value our service to our country. I would like to say ‘Thank you for all you do.’” 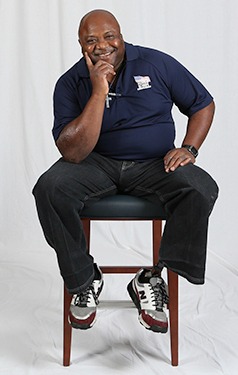