On March 19, 2009, Army Sergeant Austin Burchard was serving with the 3rd Brigade, 10th Mountain Division, as a fire support specialist, when he became paralyzed from the waist down by a gunshot wound in Wardak Province, Afghanistan. Upon feeling the impact of the bullet fired from the Squad Automatic Weapon (SAW), SGT Burchard began losing feeling first in his feet and then in his legs followed by excruciating pain in his abdomen as his internal organs sustained irreversible damage.

Airlifted to the Forward Operating Base, SGT Burchard underwent life-saving surgery to remove his spleen, left kidney, and his lower colon. Upon arriving in Landstuhl, Germany, surgery was performed to evaluate the burst fracture of his second lumbar vertebra as well as the transverse process fractures of the second, third and fourth lumbar vertebrae. Once he was back in the United States at Walter Reed, SGT Burchard spent 65 days recovering from additional surgeries and stabilizing before being transferred to the James A. Haley VA Hospital in Tampa.

Medically retired, Austin enjoys spending time with his family. Since receiving his home, he and his wife Donna have become advocates for HFOT, often attending events for fellow Home Recipients in the Tampa area. Austin plays wheelchair basketball and wheelchair softball and loves spending time outdoors. He works full time in Tampa and is taking a full load of college courses at night to earn a bachelor’s degree in computer programming. 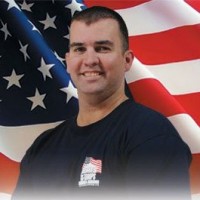