Deciding that college was not the right fit for him, Chad Brumpton joined the Marines in 1994 as an Infantryman for the adventure and challenge. Later in 1998 he switched his military occupation specialty to tank crewman.

On May 8, 2005, during his first combat deployment with Alpha Company, 1st Tank Battalion, SSgt Brumpton was part of a quick reaction force  when his vehicle was hit by an improvised explosive device (IED) in Al Qa’im, Iraq. Severely injured and under attack by small arms fire, Chad was evacuated to a Forward Operating Base (FOB). Once back in the United States, Chad spent seven months at Balboa Naval Medical Center in California for rehabilitation. After two years of limb salvage, in January 2008, Chad had both legs amputated below the knee to live a better-quality life.

Now medically retired, Chad enjoys biking, hiking, swimming, and traveling with his wife, Stacy, and their son, Lukas. Although Chad lives an active lifestyle, he still faces challenges within his home when he is in his wheelchair. The carpet, narrow doorways, and kitchen cabinets out of reach make it difficult to accomplish daily tasks. Receiving a specially adapted custom home will give Chad and his family peace of mind. Being able to access the entire home in a wheelchair, including his son’s bedroom, will enable him to be the father he desires to be. He looks forward to focusing on his family, the financial freedom so he can start a business, and the independence his new home will give him.

Chad says the thanks he has for HFOT donors and supporters will never be enough. “Knowing I will receive this gift, an amazing accessible home in which I can raise my family and not think twice about comfort and security, is immeasurable.” 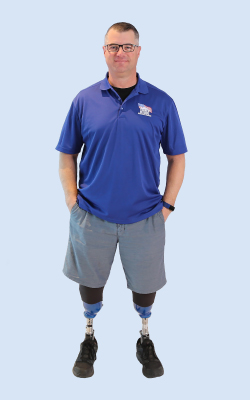