Feeling like he was destined for more than a minimum wage job, Timothy Brumley followed his family’s footsteps and joined the Army.

On May 3, 2005, Sergeant Timothy Brumley was an Infantryman with the 173rd Airborne Brigade on his second combat tour in Afghanistan. During a quick reaction force mission in the Arghandab River Valley, a booby trap exploded beneath Tim, resulting in the amputation of his left leg below the knee.

Though Tim has made significant progress in his recovery, he still experiences obstacles within his home. A new specially adapted custom home will enable Tim to regain his freedom and independence. He is looking forward to an adapted kitchen where he can practice cooking. Without the burden of a mortgage, Tim and Teresa hope to be able to travel together as a family more often, and teach their children about various cultures. Tim is relieved that he will have a specially adapted custom home where he can live with comfort and ease, especially when he is older.

Originally from Roswell, New Mexico, Tim and Teresa are choosing to build their forever home in Montgomery, Texas.

Tim would like to thank the HFOT donors and supporters for this opportunity. “It is great to find some peace of mind after so much turmoil. We are very much looking forward to the process and meeting other HFOT Veterans.” 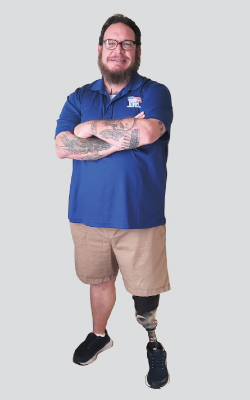