Marine Sergeant Robert Bruce was on his fourth deployment when he lost both of his legs and sustained multiple shrapnel wounds when he stepped on an improvised explosive (IED) in the Helmand Province, Afghanistan on March 9, 2011.

While providing security for the squad’s minesweeper, the 3rd Battalion, 5th Marines were making their way up a hillside, clearing IEDs so that the area could be used for future operations, when an IED was triggered, injuring a fellow Marine. Alerting his squad to the incident, Sgt Bruce went to administer aid to his injured comrade when a second IED was triggered; the blast traumatically amputating both of his legs below the knees. Lifesaving measures prepared Robert and the other injured for medical evacuation by helicopter.

Treated at Camp Bastion, he was stabilized for transport to Landstuhl, Germany. Sgt Bruce arrived at Bethesda Naval Medical Center within days of his injuries and remained there for a month while enduring multiple surgeries before being transferred to Balboa Naval Medical Center where he was fitted for his prosthetics and began his physical therapy. Sgt Bruce enjoys spending time with his wife Megan and they are pleased to be planning their future, living in their hometown.

Robert loves movies and video games, and enjoys camping and hosting barbecues. An NRA Member and Instructor, Robert enjoys recreational target shooting. With plans to go back to school, Robert would like to find employment as a firearms and small unit tactics instructor for a government agency.

Robert is grateful to those who made his specially adapted home a reality. “Thank you for all you do to support our injured Veterans…addressing each of their individual needs in the features of the homes you provide. Your support really means a lot to me.” 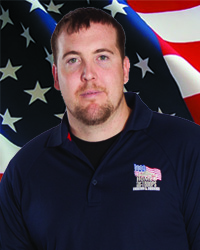