SGT Roberts was riding in the commander’s hatch of an armored (Stryker) vehicle when it was destroyed. He recalls being unable to exit the vehicle and hearing a piercing buzzing and ringing in his ears and then the driver and medics pulling him out and working on his injuries. His next memory is waking up at Walter Reed Medical Center with his father and brother by his bedside seven days later.

SGT Roberts underwent several surgeries following his injury, including the eventual amputation of his left leg below the knee by doctors at the Brook Army Medical Center for the Intrepid in San Antonio.

The couple’s six children, three of whom are still living at home, are grateful Brian is now able to focus on his healing and no longer worry about where he will live while he is under hospital care. Living in the new home helps him and his family live by their favorite quote: “Home is where the love resides, where memories are created, friends are always welcome and laughter never ends.” 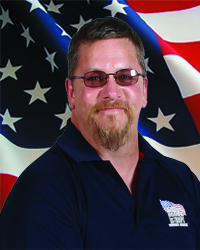