Ronell Bradley joined the Army as a combat engineer looking for adventure. His first tour was to Bosnia in 2001, followed by deployments to Iraq in 2003, and again in 2004.

During this third deployment, Staff Sergeant Bradley was serving with the 4-64 AR BN, 3rd Infantry Division, in Baghdad.  On September 21, 2005, his vehicle drove over an improvised explosive device (IED), resulting in the loss of both of his legs, severe hand injuries, a traumatic brain injury (TBI), and memory loss.

Evacuated to the military hospital in Baghdad, SSG Bradley was later airlifted to Germany before arriving at Walter Reed Army Medical Center in Washington, D.C., where his left leg and right pinky finger were amputated.

Ronell spent three months in the hospital and another nine months undergoing extensive therapies while learning to use his new prosthesis. In his previous home, Ronell often became frustrated because he had to rely on his family to get around because the home was multi-level and not wheelchair accessible.

Now ten years after receiving his Homes For Our Troops home, Ronell enjoys spending time with his wife, Cynthia, and his two stepsons. His goal is to obtain his PhD in Healthcare Management and pursue a career with the Department of Veterans Affairs. Since receiving their HFOT home, Ronell has started a small business, and Cynthia has completed her master’s degree and now works at Ft. Jackson. Ronell says he is able to do daily tasks around the home like light house work. “The home has helped me with these activities by enabling me to independently move around and access every room safely without the assistance of my family,” he says.

Ronell enjoys movies, martial arts, weight lifting and traveling. He is a member of AMVETS, DAV, PVA, the American Legion and the Military Order of the Purple Heart.

Ronell appreciates the support of HFOT’s donors and supporters. “Thank you for this amazing home. Your support and dedication to the HFOT cause is great,” he says. 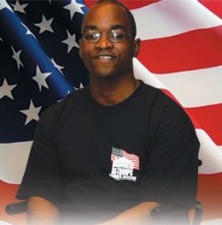