Marine Corporal James “Michael” Boucher was on his second deployment when he lost both of his legs in an improvised explosive device (IED) blast in Sangin, Afghanistan on June 12, 2011.

While on a foot patrol as a combat engineer with the 2nd Combat Engineer Battalion, Cpl Boucher was struck by an IED resulting in the traumatic amputations of both of his legs above the knee and severe injuries to his left hand.

Landing in the crater created by the IED, and seeing that both of his feet were missing, Michael began treating himself; applying a tourniquet to his injured right leg. The Corpsman arrived immediately and took over the first aid, placing additional tourniquets while waiting for the MEDEVAC helicopter. Flown to Camp Bastion and next taken to Bagram Air Base, Cpl Boucher was eventually airlifted to Landstuhl, Germany before arriving at Bethesda Naval Medical Center in Maryland. He remained there for more than 16 months, enduring surgeries and rehabilitation before medically retiring and returning home to Georgia.

Cpl Boucher enjoys hunting, fishing, and spending time with family and friends. He and his wife Kaley are busy raising their three children. He is a member of the AMVETS and The Marine Corps League. Michael and another Homes For Our Troops Veteran, Tony Mullis, have created their own non-profit called Amputee Outdoors; a program that takes wounded Veterans on hunting and fishing trips. 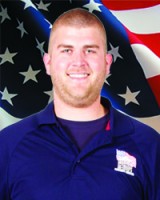