On July 8, 2009, Marine Sergeant Joshua Bouchard was on his second deployment when he lost his left leg and broke his back after his vehicle drove over a pressure plated improvised explosive device (IED) in Helmand Province, Afghanistan.

While out on a night mission, Sgt Bouchard and four other Marines were injured in the blast. Two of his team did not survive their injuries. Ejected from the vehicle, Sgt Bouchard’s left leg was severed by the gun turret, causing a traumatic amputation. When he hit the ground, his back was broken by the impact and he sustained a traumatic brain injury (TBI). Lifesaving measures were performed and a tourniquet applied by one of his injured comrades helped stop his loss of blood.

A British Royal Marine performed a direct person transfusion onsite to keep Sgt Bouchard from dying on the battlefield. Unconscious, Sgt Bouchard was treated at a local hospital before being airlifted to Landstuhl, Germany, where he spent two weeks being stabilized for transport to Bethesda Medical Center.

Sgt Bouchard enjoys the outdoors. He plays wheelchair rugby and loves music. He enjoys “messing around” with turntables and likes to Disc Jockey.

Since moving into his home, Joshua has reached his goal of learning to walk again. “Thank you HFOT for the gift of my house. It gave me a worry-free environment allowing me to focus on my rehab. Your gift and influence are part of the reason I can walk today.” 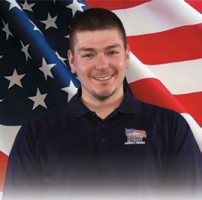