Brian Boone first joined the Army in 1996 as a way to pay for his college education. After serving four years as a medic, he left the military, studied audiology at the University of South Alabama, and started a family with his wife Nicole. Years later while self-employed as a landscape designer, Brian missed the camaraderie of serving and felt compelled to serve again. He re-enlisted in 2009, this time as an explosive ordnance (EOD) technician with the 129th Explosive Ordnance Disposal Company based out of Fort Lewis, Washington.

On Nov. 15, 2011, during his first combat deployment, Staff Sergeant Boone sustained severe damage to his left leg when the vehicle carrying him struck an improvised explosive device (IED) in Regional Command East, Afghanistan. The wound was so severe, doctors at Bagram Airbase were forced to amputate his leg.

Now medically retired, Brian enjoys sports and being outdoors. More than anything, Brian enjoys spending time with Nicole and their son. He would like to focus more on his family, but the obstacles he experiences in their current home often limit the activities he can do. Although he has come a long way in his recovery, Brian still experiences nerve damage and pain, and there are days where he has to use his wheelchair fulltime. The family currently shares a 1950s home that is not wheelchair accessible, and it is discouraging for Brian to have to rely on his family for help. It is hard for Nicole to watch her husband struggle, and she constantly fears for Brian’s safety, especially in the shower, where he has fallen several times. Receiving a specially adapted custom home will mitigate many of these obstacles. “My whole family will benefit from my ability to be more independent,” he says.

Originally from Alabama, Brian is choosing to build his home in Texas where his family has rebuilt their life after Brian’s injury, and to be close to healthcare.

Brian wants to thank HFOT’s donors and supporters for providing his family with stability. “A lot of times the families of injured Veterans get lost in the wash because all the focus is on us. Our families have made huge sacrifices too, and I feel like the gift that HFOT provides is a sound future not only for the Veteran, but the families as well,” he says. 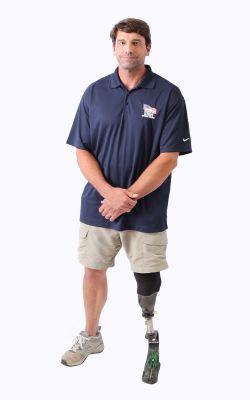