Army Specialist Brett Bondurant was five months into his first deployment when he lost his right leg above the knee and his left leg below the knee in an improvised explosive device (IED) blast in Southwest Kandahar Province, Afghanistan on Sept. 28, 2011.

Acting as the minesweeper while clearing a compound of suspected IEDs, SPC Bondurant had just stepped into a darkened room…his second step triggered the pressure plate of an IED; the blast traumatically amputating his right leg above the knee and his left leg below the knee. He also sustained severe injuries to both arms.

Minutes later, the medic knelt down to administer aid to SPC Bondurant and triggered another IED; the blast throwing SPC Bondurant through the air for a second time. While waiting for the platoon medic to come to the aid of the injured, SPC Bondurant heard a third IED detonate outside of the compound. A helicopter was dispatched to evacuate the injured Soldiers and SPC Bondurant was transported to a local field hospital before being stabilized for transport to Landstuhl, Germany. SPC Bondurant arrived at San Antonio Medical Center within days of his injuries and remained there for more than a year, enduring nearly two dozen surgeries.

SPC Bondurant grew up in Lawrenceburg, Indiana and married his High School sweetheart, London. He enjoys sports, fishing, motorcycles, wheelchair basketball, and spending time with family. Brett and London now have two daughters. Since moving into his HFOT home, Brett has started playing sled hockey. He recently completed a national clinic in Buffalo and was coached by fellow HFOT Home Recipient Joshua Sweeney. In 2019, he was elected Council-At-Large for the City of Lawrenceburg in Indiana.

SPC Bondurant would like to thank those who support Homes For Our Troops and shared the following, “As a disabled veteran, it is hard to stay positive at times, especially since I am faced with many challenges on a daily basis. Having an accessible home, built to meet my specific needs erases some of those challenges, gives me back my independence and gives much more hope for me and for my family’s future. Thank you.” 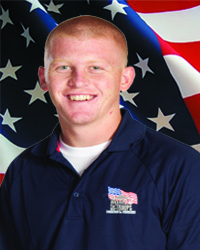