Army Sergeant Justin Bond re-enlisted immediately following the September 11 terrorist attacks. On Sept. 4, 2004, SGT Bond was supporting a Marine unit during the Battle of Fallujah in Iraq when he was shot in both knees.

More than 700 insurgents surrounded the convoy as it was on a mission near the Baghdad Airport, delivering supplies to the Marines on the ground. Rocket propelled grenades, mortars, improvised explosive devices (IEDs), small arms fire, and 50 caliber machine guns were used as the insurgents conducted the ambush which resulted in the capture of one Soldier and a civilian contractor, the deaths of a Soldier and five civilian contractors, and injuries to many, including those sustained by SGT Bond.

Six hours earlier, SGT Bond had been in another attack where he was blown 30 feet and knocked unconscious. Finding himself severely injured during the ambush, SGT Bond was treated by medics who prepared him for transport to the local hospital where he was readied for his evacuation to Landstuhl, Germany. Arriving at Walter Reed after being stabilized, Justin spent more than 15 months enduring 34 surgeries to try to save his legs, the last being the amputation of his left leg above the knee. He is now In the process of trying to save his right leg and is looking at future surgeries beginning with a complete knee replacement.

Medically retired, Justin has become a good friend to HFOT often speaking at events for fellow Veterans and other corporate engagements to raise awareness about the cause. He has been working with a furniture company to provide furniture to Veterans at no cost. He also runs a nonprofit that works with Veterans and their families to overcome the psychological challenges. 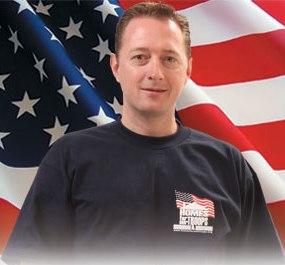