Despite not growing up with family in the military, Tim Bomke felt connected to service and joined the Army as an Armor Officer in 2002.

On June 3, 2005, in Kirkuk, Iraq, Captain Bomke was on a quick reaction force team with the 3/116th Cavalry Brigade Combat Team when his vehicle was hit by an improvised explosive device (IED) during an ambush. The blast resulted in the eventual amputation of his right leg below the knee, left leg limb salvage, and burns on 25 percent of his body.

Once back in the United States, Tim spent over a month at Madigan Army Medical Center in Washington undergoing over 40 surgeries. In 2006, Tim decided to have his leg amputated for a better-quality life, but still has challenges with blood flow to his residual limb. After his injury, it took time to accept that life would be different and that he would be okay.

Now medically retired, Tim enjoys water sports, camping, hiking, traveling, and reading. He is involved in his church community and is a member of the Bainbridge Aquatic Masters team. He competes in swimming and sitting volleyball. While Tim lives an active lifestyle, he still experiences challenges within his home after a long day. His current home has stairs and narrow doorways making it difficult to use a wheelchair when he needs to take his prosthetic off.

Receiving a specially adapted custom home from Homes For Our Troops will help with his recovery. Taking a shower is stressful because he risks falling. His wife, Ashley, will have peace of mind and will have more time to focus on her career and further her education. He looks forward to his children, Kate and Tim, seeing their dad live independently and safely in their home.

Originally from California, Tim is choosing to build his home in Washington, where he currently lives.

Tim cannot thank HFOT donors and supporters enough. “I feel this adaptive home will provide my family and me with safety, security, and peace of mind for the rest of my life. This gift is something so crucial and invaluable,” he says. 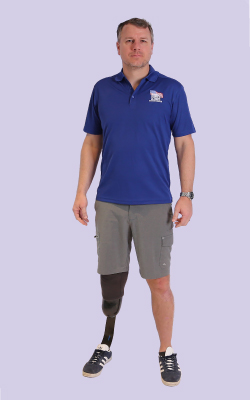