On June 2, 2011, Army Specialist Fidel Bobadilla, Jr., was just two months into his first deployment when his armored fighting vehicle was struck by an improvised explosive device (IED) in Zabul Province, Afghanistan, resulting in the loss of both of his legs above the knee.

While returning to base after assisting with the drop off of a squad with the Army Special Forces, SPC Bobadilla was riding in the last Stryker (armored vehicle) pulling rear security when an IED detonated beneath him and another soldier. The force of the explosion thrust him into the air and eventually on top of the vehicle, causing severe injuries including the loss of both legs above the knee. SPC Bobadilla’s fellow Soldiers are credited with evacuating him from the vehicle to safety, whereupon he was airlifted for medical treatment.

The special adaptations in his HFOT home enable Fidel to be the husband and dad he was meant to be for his wife Daisy and their three children. He is planning to go to school for social work or counseling. In addition to being a fulltime father, he works out with a CrossFit group, participates in athletic events with Team Red, White and Blue and is active in his church.

Army SPC Fidel Bobadilla says his specially adapted home has given him peace of mind knowing his family is living in a safe and comfortable environment. The home has also opened up athletic opportunities for him as he is able to practice in his own backyard. He plays basketball with the Central Valley Ballers and has taken up archery with fellow HFOT home recipient Justin Bond. He is hoping to apply to college soon. “I have been able to focus on myself and gain my confidence back,” he says. 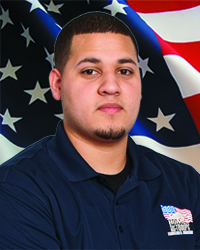