With the goal of pursuing a law enforcement career, Christopher joined the Coast Guard immediately after high school. This was the beginning of a long military career, four of his eight years in Coast Guard were spent as a helicopter rescue swimmer. He then worked for the post office for a couple of years before deciding to join the Marine Corps, where he worked in Force Recon for five years. He left the military in early 2001 and quickly enlisted with the Connecticut Army National Guard after the 9/11 attacks.

On April 4, 2010, during his first deployment, Master Sergeant Blauvelt was on a patrol in Laghman Province in Afghanistan with the 1st Battalion, 102nd Infantry Regiment, 42nd Infantry Division, when an improvised explosive device (IED) detonated under his vehicle. The blast caused the traumatic amputation of his right leg, spinal fractures, a fractured pelvis, and a traumatic brain injury (TBI). He was treated in Afghanistan before being transported to Landstuhl, Germany, and then Walter Reed Medical Center in Washington, D.C.

After medically retiring in 2012, Christopher enjoys spending time with his wife Bernadette and their five children. In his current home, daily obstacles, like taking a shower, are a safety risk. Friends with HFOT home recipient Marine Cpl Tim Read, Christopher has seen first-hand the freedom and independence a Homes For Our Troops home provides.

In a specially adapted custom HFOT home, special adaptations like the roll-in shower, will provide a sense of relief. Christopher will also have the financial freedom to further his education, and have more time spend on his hobbies. In the future, he would like to pursue a degree in clinical social work. Bernadette owns and operates her own painting and craft store called B Creative Painting Studio in Wesley Chapel, and they are looking forward to continuing their business.

Originally from Connecticut, Christopher is choosing to build in Florida to be close to medical care.

Christopher says it’s an amazing feeling to have HFOT and their donors taking care of Veterans like himself. “The gift of a mortgage free home is beyond generous and we are so grateful!” 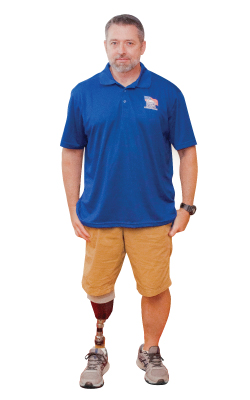