On June 30, 2005, Marine Corporal Kevin Blanchard, a combat engineer, was on patrol in northwest Iraq with the 4th Combat Engineer Battalion, 4th Marine Division, when his vehicle was hit by an improvised explosive device (IED). There were four other Marines in the vehicle, but Cpl Blanchard was the most severely injured, losing his left leg and sustaining severe damage to his right. Cpl Blanchard says the only reason he survived was because there was Navy Corpsman riding with him.

Cpl Blanchard spent the following 13 months undergoing 30 surgeries at Walter Reed Medical Center. He was in a wheelchair for eight months and battled a bone infection in his right leg that nearly caused it to be amputated.

In the ten years since his injury, Kevin has maintained an adventurous and active lifestyle. Shortly after medically retiring in 2006, he received a bachelor’s degree in international business from The George Washington University and a master’s in the Science of Management from Catholic University. He has worked in Veteran Service Organizations, focusing primarily on healthcare, employment, and franchise business opportunities for veterans transitioning from military service. He is the co-founder of a San Diego-based nonprofit organization helping Veterans gain employment within the Medtech industry. He is involved with events and groups within his community, plays golf and enjoys cycling. An avid traveler, he has backpacked through much of Latin America while studying Spanish and volunteering at prosthetic clinics.

Kevin is currently writing a book about his recovery and Post Traumatic Growth. He is also working on building an online platform to help other survivors tell their stories and why their experience has changed them for the better. He says having a home adapted to his injuries helps with these goals. Two main adaptations he says that are beneficial is the wider hallways/doorways and accessible shower, which will make it easier for him to move around.

Originally from Roanoke, Virginia, Kevin and his wife, Myra, chose to build their home in Crozet, Virginia for its creative atmosphere, abundance of outdoor activities, and proximity to both their families.

Kevin and his wife Myra have already had many memorable moments since receiving their HFOT home in Virginia on Sept. 30, 2017. They have been able to host friends and family; adopted an American Mastiff puppy named Socrates; and Kevin became a certified personal trainer from the National Academy of Sports Medicine (NASM). In February 2020, Kevin climbed to the summit of Mt. Kilimanjaro. Most importantly, Kevin and Myra became parents to their first child, a baby boy, in December 2018, and are expecting a baby girl in July 2021. “Moving into our HFOT home contributed to all these moments and we are forever grateful,” Kevin says.

Kevin says he is grateful to those who supported the building of his specially adapted home. “Your support will never be forgotten. It will have a very positive effect on me and my family’s life. I hope that one day I am in a position to give back on a similar level.” 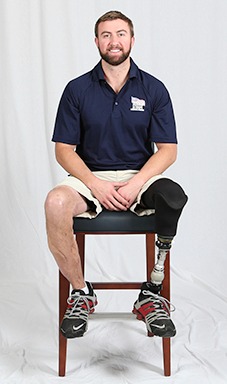