Third Class Petty Officer SW3 Blackmon and his group had just completed a convoy operation in Al Ramadi, Iraq and were mustering for a post-mission brief at Camp Fallujah when one of two mortars struck in the center of the group. The blast killed five Seabees and injured 20 others. Blackmon’s injuries were some of the most severe of those who had survived. “He wasn’t supposed to make it,” says Jeanette Blackmon. “But God brought him back home.”

After a year spent in VA hospitals in Tampa and Lakeland, Fla., Jeffery finally made it back home, but a severe head injury left him paralyzed from the neck down and unable to speak. He is able to communicate with his wife and three sons Jeremy, Christian, and Matthew, through a computer that reads eye movement. Unlike most with similar injuries, Jeffery feels pain. Jeanette had given up on ever building their house. Then the people of his hometown stepped in and started to build a complete, 3100 sq. ft handicap accessible home for the Blackmons.

People involved include: Carlos Jones Sr. and Carlos Jones Jr. of “SKILLS USA” a construction Education Program in the Camden County School System, and local contractor W.H. Gross Construction. Homes For Our Troops helped the Blackmon’s finish their home by providing the cabinetry, countertops, and flooring for the home as well as obtaining the needed services to make the home complete. 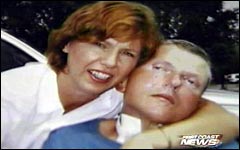