In November 2005, Army Sergeant Latseen Benson was on his second deployment to Iraq. While on patrol with his unit, his vehicle came upon an improvised explosive device (IED), halting the convoy in Kirkuk, Iraq.

SGT Benson was ordered to search around his vehicle and while doing so, a bomb buried in a grain sack exploded causing the traumatic amputations of both of his legs. First-aid measures by members of his unit saved his life as he was transported to a local hospital in Balad. Upon being stabilized, SGT Benson was airlifted to Landstuhl, Germany, where he would face the first surgeries required to begin his recovery process.

Arriving in the United States, SGT Benson spent nine months as an inpatient at Walter Reed Army Medical Center before being released to out-patient treatment in Texas.

SGT Benson enjoys spending time with his wife, Jessica, and son, Gage, and daughter, Olivia. Jessica works as a CPA and Latseen stays busy taking care of his children when they’re not in school. He is also active in adaptive sports, Latseen participates in skiing, scuba diving, tennis, softball, basketball, sit-volleyball, fishing, shooting, and hand-cycling. He is a member of the VFW and the American Legion.

SGT Benson would like to thank everyone for their support. Living in a specially adapted home gives Latseen the opportunity to live a life with the freedom and independence he fought to preserve for this country. 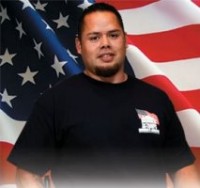