Kyle Beddow joined the Army in 2011 as an Infantryman and Paratrooper with the 82nd Airborne Division. He immediately loved the training and camaraderie of serving with his brothers in arms.

On May 20, 2012, Specialist Beddow was on his first combat deployment serving with the 1st Battalion, 508th Parachute Infantry Regiment, in Afghanistan when he lost his left leg in an improvised explosive device (IED) blast.

Kyle was first flown to Kandahar Airfield for immediate medical treatment, followed by Bagram in Afghanistan and then Landstuhl, Germany, before being transported back to the United States at Walter Reed Medical Center. There he was reunited with his family, including his son Jordan, who was only eight months old at the time.

Now medically retired, Kyle enjoys traveling to see friends and family all over the country. He is also an avid scuba diver and competes in a series of off-roading races throughout the year.

Though Kyle has adapted to his injuries over the years, he still cannot fully access his current home because it is not wheelchair accessible. He often becomes frustrated when he cannot get through doorways or reach appliances from his wheelchair and rolling over steps and obstacles for simple daily household tasks. Receiving a single-level Homes For Our Troops home with wide, automatic doorways and an open floorplan will make it easier for Kyle to focus on raising his son rather than worrying about his mobility. “A home is supposed to be a place to relax, be safe, and feel welcomed,” he says. “Receiving a donated home, I will be in an environment that doesn’t always seem like a battle to be in, where I can focus on what is truly important and less on the negatives that currently hinder the goal of a safe and welcome environment.”

Originally from California, Kyle is choosing to build his home in Texas, to be closer to fellow Veterans he served with.

Kyle wants HFOT donors and supporters to know he appreciates their efforts. “I have so much gratitude and respect for everyone who makes these homes a reality for our nation’s severely injured combat Veterans and their families,” he says. 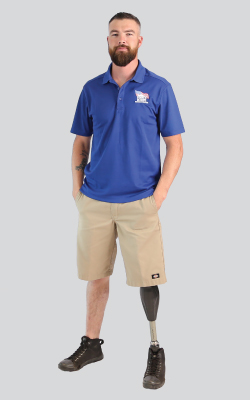