Nicholas “Nick” Beberniss joined the Marines shortly after high school with the desire to fight for something bigger than himself, following the footsteps of his grandfather, who served in Korea. He enlisted as a mortarman with the 2nd Battalion, 7th Marines, deploying to Iraq in 2004.

On July 21, 2004, then Lance Corporal Beberniss was serving in Al Anbar Province, Iraq, when a double-stacked anti-tank mine hit the vehicle he was riding in. LCpl Beberniss sustained broken ribs, a broken back, fractured pelvis, punctured lung, and severe damage to both legs in the blast.

Once transported back to the United States, Nick endured numerous surgeries to save his legs. Doctors eventually amputated Nick’s right leg below the knee. Once he recovered enough, Nick switched his specialty to small arms repairer to remain in the Marines. He became the first Marine to reenlist on Permanent Limited Duty and later finished his career on Expanded Limited Duty. Toward the end of his career, he noticed some physical changes including difficulty walking, fatigue, paralysis, and double vision, and was diagnosed with Service-Connected Multiple Sclerosis, forcing him to medically retire in 2019 at the rank of Gunnery Sergeant.

Today, Nick and his wife Leslie are busy raising their three children, Taylor, Mason, and Peyton. The family has a variety of farm animals, and Nick loves watching his children learn 4-H skills. He has been adjusting to civilian life over the past few years and enjoys taking life one day at a time. However, Nick’s current living situation poses unavoidable challenges. He and his family have been living with Leslie’s parents ever since he left the military. Nick does not want his in-laws to modify their home, but the hallways and doorways are too narrow for his wheelchair. Leslie often fears Nick will fall and harm himself further while showering. Receiving a specially adapted custom Homes For Our Troops home with an open floorplan and accessible bathroom will alleviate these concerns.

Nick’s most important goal in life is the well-being of his children and supporting their academics and interests. Without the stress of a non-accessible home, Nick will be able to put his family first. “In the new home, we plan on having a lot of fun times and happy kids,” he says.

Originally from Colorado, Nick is choosing to build his home in Arizona to be close to family.

Nick and Leslie say HFOT is the biggest blessing and are grateful to the organization’s donors and supporters. “Your grit, drive, patriotism, and love for service members are unmeasurable. To see so many people rally to make sure we have a normal life in a safe, comfortable environment means the world to my family and me,” Nick says. 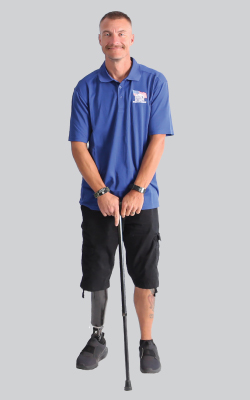