Army Corporal Wesley Leon-Barrientos was deployed to Iraq with the 101st Airborne Division in December 2007. While supporting his team on an air assault mission near Iskandariah, his team discovered and destroyed several car bombs and a weapons cache. Roadside bombs were encountered on the return trip to base and the convoy was diverted for security purposes.

While maneuvering around a suspected bomb, the truck carrying CPL Leon-Barrientos rolled over an improvised explosive device (IED) causing the explosion to rip through the vehicle. Sitting directly behind the driver, Wesley lost his left leg and right foot in the blast and sustained severe calf injuries as well as a broken jaw. After being airlifted by a Blackhawk helicopter, CPL Leon-Barrientos fell unconscious and awoke two days later in Germany where he was stabilized for transport to Walter Reed.

Since moving into his specially adapted home, Wesley has been busy supporting his fellow Veterans. He has hand-pedaled across the country to raise awareness about Veteran suicide rates and has become a motivational speaker to other injured service members. 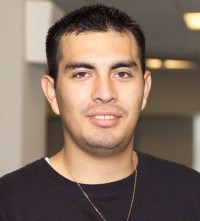