Army Sergeant First Class Edgar Barrera joined the military two years before the 9/11 terrorist attacks. He fell in love with the Army and deployed three times during his almost 15 years of service. During his third deployment, while on dismounted patrol as a platoon sergeant with Alpha Company 1-23 Infantry 2nd Infantry Division, SFC Barrera lost both legs and his left hand during an improvised explosive device (IED) explosion in Panjwai, Afghanistan on July 7, 2012.

A few days later, SFC Barrera arrived in the States, where he endured multiple surgeries at Brooke Army Medical Center in San Antonio. He spent the following two years doing rehab at the hospital’s Center for the Intrepid.

Since being injured, Edgar has been busy with his career goals and family. He is currently studying graphic arts and animation at Central Texas College; he is a DJ, and enjoys spending time with his wife Lucia and their two children.

As he recovered from his injuries, Edgar still faced challenges in his previous home. He could not get into his son and daughter’s rooms because the doorways were not big enough for his wheelchair, and he had little room to work on art projects, especially with his son who has developed an interest in drawing.

Edgar says his specially adapted home from Homes For Our Troops, gives him “the freedom of movement.” This enables him to concentrate on school and finish his degree, and the open floor plans allow him to spend quality time with the family. The home also benefits the family’s two dogs – Spike and Sprinkles – who like to follow Edgar around all the time, but had trouble doing so in their previous home because the hallways were too small.

Edgar and Lucy grew up in Moreno Valley, Calif., but Edgar chose to have his home built in New Braunfels, Texas because of its location out of the main city and good school district.

Edgar says it is a blessing knowing there are people wanting to support wounded service members. “There are no words to describe the feeling of gratitude my family and I have for HFOT’s staff, donors and supporters,” he says. 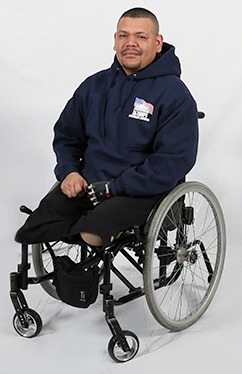