Robert Barber joined the South Carolina Army National Guard shortly after high school. He first deployed with a Military Police Company to Iraq in 2007-2008, operating around Baghdad. He deployed again to Khost Province, Afghanistan in 2011.

On June 20, 2012, Army Sergeant Robert Barber was at dismounted traffic control point (TCP) conducting operations with the 133rd Military Police Company in Khost, Afghanistan when a suicide bomber set off an improvised explosive device (IED). SGT Barber recalls the heat of the blast being hotter than anything he had ever felt. After the blast, while attempting to stand he fell down in a ditch. When he was pulled out, he began having difficulty breathing. Once he was loaded onto the vehicle, engineers performed CPR during his transportation to Forward Operating Base Salerno. There, the doctor discovered three of the four valves of SGT Barber’s heart were not functioning so she performed a heart massage. She later told SGT Barber she did not expect him to survive the flight to Bagram Air Base.

When SGT Barber awoke at Walter Reed, his right leg had been amputated and he had lost complete use of his left. He now wears a prosthetic on the right and a brace on the left. He spent much of his first few weeks at Walter Reed being intubated because his oxygen levels kept dropping. He was also treated at VA facilities in Florida and Georgia before arriving at Brooke Army Medical Center in San Antonio where he remained until the fall of 2013.

Now medically retired, Robert loves spending time in the outdoors, riding his motorcycle, and taking his two sons and two daughters to baseball games. He is on the Board of Directors for the Freedom and Hope Foundation, a South Carolina non-profit that takes injured Veterans hunting and fishing. In addition to being on the board, he is also responsible for recruiting Veterans to participate in the program. He also plans to return to college.

Robert says his specially adapted Homes For Our Troops home empowers him to be a better father. In his previous home, the children’s rooms were upstairs so it was difficult for him to help them get ready and put them to bed. For a time, his children were not able to do extracurricular activities because he didn’t have the energy to take them. “Now that my life at home is easier, my children’s lives outside the home will be so much better,” he says.

Robert chose to build his home in Chapin, South Carolina for its good school system and rural setting. The location is also relatively close to his family.

Robert says he cannot be happier to be living in a home that gives him and his family a new normal. “A chance to live with freedom and to live normally and be a father is right up there with being given a second chance with my children. I thank any person that supports HFOT from the bottom of my heart.” 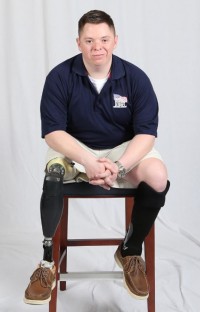