Growing up in a small town in Oklahoma, Yancy Baer was searching for a career that would provide him with growth and opportunity. After talking to a few recruiters, he decided to join the military. He enlisted in the Army as an Infantryman, and was commissioned through the Green to Gold program, which gives Soldiers the opportunity to earn a degree and become a second lieutenant.

In November 2009, during his fourth combat deployment, Major Baer was serving with the 10th Special Forces Group when he sustained severe damage to his left heel during a landing incident in a rotary wing aircraft while conducting operations in Iraq. Throughout his service he also sustained other injuries including severe damage to his right knee and a traumatic brain injury (TBI).

Once he returned to the United States, Yancy underwent surgery on his left heel, which was broken. Doctors replaced his bone with one from an organ donor. After a third surgery, doctors discovered a malignant tumor in the donor bone in Yancy’s heel, requiring him to undergo chemotherapy. Five months into his treatment, doctors amputated his left leg.

Now medically retired, Yancy enjoys volunteering with the nonprofit Wounded Warrior Outdoors and he is on the Board of Directors for Amputee Adventure Camp. He also likes collecting vintage Star Wars items, sky diving, scuba diving, and riding his motorcycle.

Though Yancy has made an impressive recovery, he is finding it increasingly challenging to do simple tasks like laundry, bathing, and hobbies in his current home since it is two stories and not wheelchair accessible. Receiving a single-level, specially adapted custom home from Homes For Our Troops will be crucial to Yancy’s continued quality of life. Most importantly, Yancy is looking forward to having a forever home. “This home will enable me to finally settle into my retirement home and give me peace of mind that I will have a comfortable place to live out my life.”

Originally from Oklahoma, Yancy is choosing to build his home in Texas for the sense of community and friends in the area.

Yancy says he cannot thank HFOT’s donors and supporters enough. “Your contributions change the lives of injured service men and women directly by providing a home, a foundation, for them and their families. You provide them with comfort, peace of mind, and safety. Your service, in the form of donations and support, is just as great of a service and sacrifice that they have made. They served their country to ensure our freedoms are not lost and you served your country by supporting HFOT to ensure they continue to live with those freedoms.” 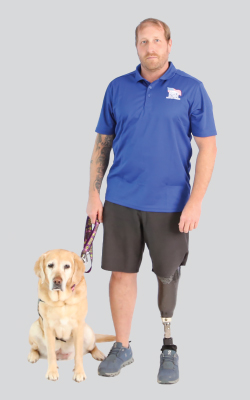