Army Sergeant Odin Ayala was on his third deployment when he lost both of his legs in an improvised explosive device (IED) blast in Kandahar, Afghanistan on Sept. 14, 2011.

While on a search and seizure mission, he stepped on an IED resulting in the traumatic amputations of both of his legs above the knee, and the index finger on his left hand. Medically evacuated by helicopter, SGT Ayala was treated at the Craig Joint Theater Hospital in Bagram before being transported to Landstuhl, Germany.

Since moving into his home, Odin Ayala and his wife Claudia became parents to two children. The open floor plan and wide doorways make it easy for Odin to maneuver his wheelchair throughout the home with his daughter in his lap. He is also able to help care for his children in the middle of the night.

Odin is currently studying information technology at Cuyamaca College and plans to transfer to San Diego State University. A sports fan and former high school football player, Odin hopes to coach football at the high school level in the future. He is grateful to be living a more independent life in his specially adapted home. 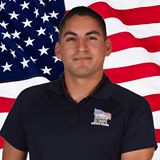