Army Specialist Andrew Wilson was on his first deployment when he lost both legs after stepping on an improvised explosive device (IED) while on a foot patrol in Kandahar, Afghanistan on Oct. 19, 2011.

While patrolling in an area that had been the location of an IED explosion three days earlier, SPC Wilson was part of the team clearing the “Red Zone.” Stepping on a pressure plate, only two feet from the bomb itself, Andrew and his best friend were both blown into the air by the blast. With his platoon frantically working to save his life, as his low blood pressure prevented him from receiving any morphine to numb the pain, Andrew’s platoon talked and sang to him while carrying him for half a mile to the medevac helicopter.

Transported to local hospitals, SPC Wilson was stabilized in-country and airlifted to Landstuhl, Germany before arriving at the Walter Reed Medical Center.

SPC Wilson enjoys running, scuba diving, and target shooting. He looks forward to returning to college and earning a degree in physical therapy, and eventually becoming a personal trainer. He is happy to be living in the area where he was raised and being close to his parents and siblings.

SPC Wilson would like to thank those who have been encouraging him on his journey to recovery. “Having an adapted home provides a comfort physically, mentally, and financially, which greatly reduces any anxiety about my future; something I have worried about since the moment of my injury. Thank you for supporting me and this amazing organization.” 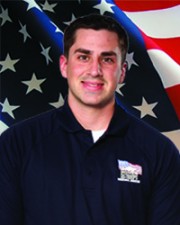